It was warm again on Monday, so we borrowed the backup battery from our sump pump to power the vaporizer for an Oxalic Acid treatment. (And when I say “we,” I mean The Engineer muscled the thing upstairs and into the wheelbarrow for me to cart it outside and treat the bees.)

Bees don’t much care for  these treatments, and I don’t blame them. As implied by the name, the vaporizer fills the hive with Oxalic Acid vapor to kill Varroa mites — not a pleasant experience, I’m sure. It’s no surprise many chose went for a cleansing flight afterward. (Go here to watch them in motion.) I watched them for a few minutes before going back inside.

I heard it immediately after closing the door — the telltale buzz of a bee in the house — and mentally kicked myself for not checking my clothing.

I carefully took off my jacket and shook it.

Convinced one was caught in my hair, I gingerly ran my fingers through the tangles.

The buzz continued. Was I imagining things?

I went in the bathroom, examined what I could see of my back. Still no bee.

I took off my shirt, gave it a gentle shake.

The buzzing continued, and I was starting to feel like a character in a sitcom.

Finally, I realized the sound was louder in the foyer, and looked up to see one of our girls banging on the second story window.

Sighing with relief, I grabbed a glass to catch her, released her outside, and watched as she flew straight back to the hive.

Even though a hive has thousands of bees, no beekeeper likes to be the cause of harm to even a single bee. Plus, in many cultures, having a bee come in the house is either good luck, or a sign of company is coming. Obviously, this only holds true if you don’t kill it. So, next time you find one in your house, use a glass and a piece of paper to catch and release her. I’m pretty sure there’s no such superstition about Yellow Jackets. Just sayin’.

Friday, we again had a look inside the hive. The weather has been changeable, the temperature readout extremely variable, and we had no idea how much sugar our bees might have consumed in ten days. As you can see from the pictures below, the answer turned out to be not much. 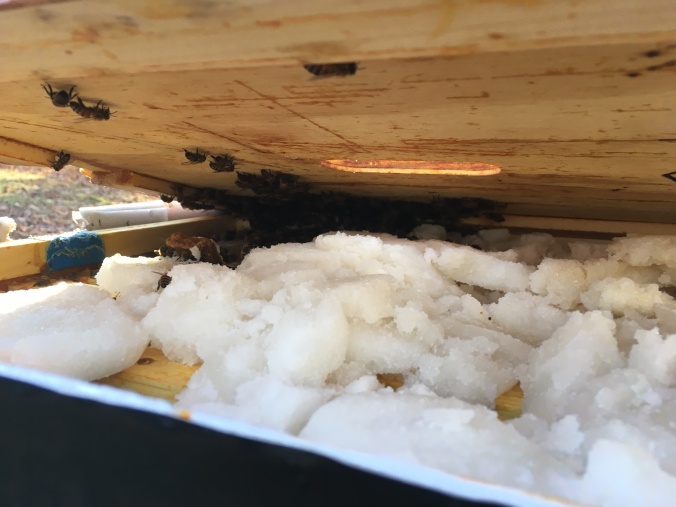 They were more interested in the pollen patty in the corner, which led me to surmise (possibly erroneously) they still have honey.

Until then, bee happy. 🙂

Yesterday morning at 9 am, it was 53* F. The Engineer opened the upper entrance a little wider, and the girls went crazy(click through for a brief video),  seizing the opportunity for mid-winter cleansing flights.

Consider this: The frigid weather has kept these girls cooped up for weeks, unable to relieve themselves outside. Small wonder they were pushing and shoving to get out.

It was poopfest. And when we got in their way, they didn’t hesitate to use us as their alfresco toilet.

Later, when things calmed down a bit, we had a peek under the hood to see where they were in the hive and how much food they had.

Many were upstairs, and their sugar patties were gone. We think this means they are either running low on food, or have been unable to move to the honey they’d stored because of the extreme cold. Probably the former.

Then, we took off the entrance reducer, fully opening the front door to scrape out the dead bees. We’d been warned it would seem like there were a lot. So, when it did, I tried to view it as part of the circle of life. (For more info, see Honey Bee Suite’s post on entrance reducers and how they can tick off your bees.)

“I hope the queen isn’t one of the dead ones,” my optimistic husband remarked, thereby giving me a whole new avenue of beekeeping worries.

We were also warned to wear our beekeeping gear because the girls don’t appreciate having their house opened in the winter, and we did, but they were pretty mellow. I think maybe we just lucked out with an easygoing hive.

Today, we’re back in winter, with predictions of an ice storm/blizzard. During the next warm spell, we’ll feed again and treat with oxalic acid once more so they can start spring with a low Varroa threshold (assuming they make it that far).

Temperature update: The hive has been fluctuating like mad, from the 20s a few days ago, back up to 90* this morning. It’s becoming clear the location of the bees  in the hive has a huge effect on the temperature readout.

Other bee news (sort of): Over the holidays, I got a couple of bee-related gifts. 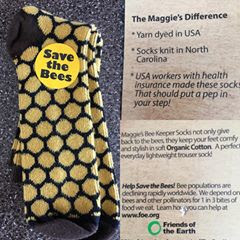 The socks are from Darling Daughter, and the shoes from a friend.
Aren’t they the coolest?

That’s the all the news from Buzzers’ Roost. Talk to you again soon! Bee warm!

Yesterday morning, the ambient temperature outside was 4* F.

We know this because the first thing I do each morning after I jump (or stagger) out of bed is aim my phone at the precise point where it receives Bluetooth reception from the hive. (It’s right under a spot where a bird made a small mess, which means I can never wash that window.)

We had been bracing ourselves for the inevitable truth that the bees wouldn’t make it through winter.The daily readings had been dropping steadily since cold weather began until they were skirting the low 40s.

You see, bees die when their bodies hit about 40*. To survive winter, they form  a “bee ball” and vibrate their bodies to generate heat. (See HoneyBeeSuite for a better explanation.) When there aren’t enough bees, they can’t generate enough heat, and the hive will die.

Between the Yellow Jackets and the Varroa, we weren’t sure we had enough bees.

Still, we clung to the hope that maybe the bees hadn’t reached the part of the box with the temperature sensor. Also, from time to time, bee corpses appeared on the “porch” and in front of the hive, leading us to believe they were still moving around inside, trying to keep order.

Or it could have been the bodies of bees mistakenly went out for some reason and froze.

See the bee bodies on the snow on the porch and the ground?

The hive scale was also showing a slow decrease in weight, but we’re new at this and weren’t sure how much to read into this, though we hoped it meant the girls were eating.

Then, just a few nights ago, the temperature shot up an amazing 20 degrees overnight!

I’m trying not to get too excited. This doesn’t mean they’ll make it through winter. Many bees make it through the cold part of winter, but die in March because they run out of food.

But for now, they’re okay.

Side note and catch-up time: I was stunned to see my last post was all the way back in November! I apologize for the neglect, and proffer this small catch-up. We managed to move the hive away from where the Yellow Jackets appear to nest and where we hope it will get a little more sun. As part of the procedure The Engineer also shortened the legs of the stand and set up the scale. Then, on the last warm day in early December we seized the opportunity to replace the full honey super, and re-wrap the whole thing.

If we get a warm spell in January or February (above 50), we’ll take a peek and add sugar patties if they are near the top of the hive.

On an unrelated note — though maybe it’s an excuse for my lapse — we’ve been busy cracking black walnuts.

Yes, they fell in November, but you’d be surprised how many nuts two aging trees can produce. Every year, we think they’re dead, and every other year, they surprise us with a crop. This year, it was a bumper one. Harvesting them is a major pain, but that’s a post for another day.

Meanwhile, I hope you can follow our bees’ example and stay warm!

One more thing, if you’re really interested, you can check the temperatures (and in some cases, the weight) of hives around the country by visiting Beecounted.org.