Summer is slowly winding down, and the bees have been making the most of the fine weather. They’ve been in a foraging frenzy, perhaps sensing the forthcoming temperature changes.

It cooled down over the weekend, with rain on and off all day today. Each time the showers stop, the foraging begins again.

And yet, when we checked the hives a week or so ago, Buzzers’ Roost had no honey, and FreeBees had very little. Instead, we saw loads of pollen, lots of nectar, and a surprising amount of capped brood.

Still, with all that nectar, there’s bound to be some honey soon.

Check out the graphs below. Notice any trends?

The first two graphs show the weight of the hive over the last month — finally trending upward. The next two show a week each, and you’ll notice daily ups and downs, probably from when the foragers are out.

So, we’re not too worried about honey levels, at least not yet.

Below is a picture of a frame containing both nectar and pollen. We also found several that were filled solely with nectar or solely with pollen. Theoretically, we should be able to identify the source of the pollen by its color, but unfortunately, I’ve not found an accurate chart online. Here are links to two if you’d like to try: Sheffield Beekeepers’ Association and Metrobeekeepers.net. My guess is mostly goldenrod because the fields are full of it. 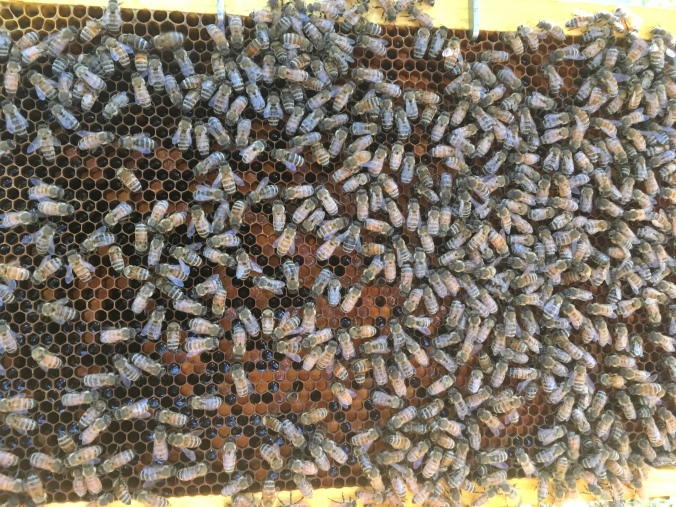 While we had the hives open, we did alcohol rolls on both. This is supposed to be a more accurate way to count Varroa.

Our count was a big fat zero on both hives.

Yeah, we must have done it wrong.

Either that or the hive beetles are eating them. Don’t even ask how many of those we found. It was too many to count.

The weird thing is, the bees mostly ignore the beetles. Once in a while, they’ll herd a particularly brazen one into a corner, but then the bees go back to whatever they were doing, and the beetle scuttles away. (Unless we get it first!)

There was propolis everywhere, especially around the beetle traps, which makes me wonder if this is the bees’ response to the pests. There were a few beetle corpses in some of the propolis, so who knows?

Unfortunately, our girls don’t seem to grasp that the traps are there to help them and had propolized the openings where the beetles are meant to enter. At least one trap had every opening completely blocked.

But let’s get back back to the subject of the main hive pest — the dreaded Varroa. For two years, we’ve used drone foundation as part of Varroa control, with very little success.

This year, both hives have ignored them.

This year, a few short weeks — okay, a few short months — before the workers start kicking out drones (to lower the number of mouths they have to feed in the winter), FreeBees has decided to make drone cells. Half the foundation was full of capped drone brood, and there were more cells on the top of some of the other frames.

Weird. Also unusual in placement. Drone cells are usually at the bottom of hive frames.

Whatever. It’s their hive. They can do what they want.

As we’d been instructed, we removed the drone foundation and opened the cells to check for Varroa, but found none there either.

I can’t believe there are no mites at all, but am willing, even eager, to believe the treatments have been working, and the threshold is safely low.

Just to be sure, we will treat both hives with Oxalic Acid before winter after we take off the supers.

I’m still holding out hope that we might be able to pull at least one frame of honey for ourselves.

It is with regret that we report that the humanitarian, geneticist, and scientist, Professor Warwick Kerr, passed away this morning, September 15, 2018. He was six days past his 96th birthday.  Dr Kerr, a Brazilian bee scientist, had one of the most maligned lives of any research scientist. He will be remembered by some as…
— Read on badbeekeepingblog.com/2018/09/15/dr-warwick-kerr-the-man-who-created-killer-bees-has-died/

I started climbing the family tree again last night and found myself back on the branch of Sarah Jane Daugherty Feather(s) Scott. (Click through for background on her story.)

Somehow I had stumbled across the Ritchie County (WV) page of the USGenWeb Project. Most the project’s sites are hosted on RootsWeb, long offline, but now coming back up.

Browsing through the Scott Cemetery transcriptions, I came across the following:

Look at the dates of the children’s deaths, born over a period of six years and dead before any of them reached their first birthday.

Above these dates are two others, who proved to be Sarah’s grandchildren through her eldest son Aldine (whose father, Cornelius, was killed in the Civil War).

I moved on to the Reeves Cemetery transcriptions, and discovered Jacob — Sarah’s brother who fought for the Confederacy — and his wife Julia suffered their own share of sorrow.

Two children dead within eighteen days of each other at a time when Jacob and Julia’s home counties were in the process of seceding from Virginia. The secession could only have added to the emotional turmoil Julia and Jacob were feeling at the death of their children, especially since we know, in the end, Jacob decided to fight on the opposite side of his brothers.

Thinking perhaps the Butchers (Julia’s family) were Confederates and had influenced this decision, I had a look at one of her brothers (Valentine) and learned he fought for the Union. Of course, there may have been others in both families (Daugherty and Butcher) who favored the Confederacy, and we can never truly know why another person makes any decision.

Yet when I think of these families, I don’t think about the men and their big decisions about who to fight for. I think of the women and how they paid for living in a time where the death of a child was the possible price of having them.

Having seen how quickly a child could be taken, did they cling more tightly to ones that remained or followed? Maybe the knowledge of how easily their heart could be broken made them more reluctant to let a new baby into that heart. Perhaps these losses were accepted as part of the sorrows of living.  Life was hard. Children died. And I’m sure the war magnified the hardship exponentially. Yet each of these couples had other children that survived to have children of their own.

As I discover this type of hardship in my family history, I am forced to recall that these same hardships — child mortality and civil war — are a daily reality for others, and I hope that this realization continues to spur me toward a more charitable way of living.

This is what’s left of one of the approximately 6″ strips of microfiber we put in Buzzers’ Roost.

The Engineer got tired of watching them pull it out and gave them some assistance.