In preparation for applying the Mite Away strips, we did a complete hive check on Friday.

We needed to find out how the brood was placed to assess where best to place the strips for treatment. Also, we wanted to get a reading on how prepared the girls are for winter.

The good news is we have a lot of bees, all squirreling away nectar/honey/pollen for the winter (a bit of a mixed metaphor, I know). We saw capped brood and larvae so our queen is still laying, albeit at a slower rate. The brood and larvae were all in the second brood box, but there were bees working in the bottom one.

There were no more capped drone cells on the drone frames. Instead, they were filling it with nectar. Hey, whatever works for them, right?

I tried to write down what was on each frame. It’s difficult to effectively transcribe and quantify, so my notes look something like “Frame 4: 1/2 1/4 honey, 2/3 nectar, some pollen; 1/2 2/3 nectar/honey.” And so on. (I actually made those amounts up — my real notes were even more confusing.)

According to my admittedly shaky calculations, the girls are coming up short on their winter supplies, and we’ll probably have to start feeding them again soon. For now they continue to feast on goldenrod, and, to a lesser extent, the asters that have begun blooming.

We inserted fresh beetle traps, but ended up also re-inserting the previously baited ones in the lower honey super because we killed two beetles there. We also sprinkled the fullest brood chamber with powdered sugar again, figuring it can’t hurt and may help until it cools down enough to use the Quick Strips.

Afterwards, we sat and watched the bees work. (We do this at least once a day.) There are always a few who have worked themselves to death (the plight of the worker bee) and just can’t fly any more. Sometimes just die on the front porch or ground around the hive.  And sometimes the other bees come along and remove them, which is always interesting to watch.

If they’re still alive, The Engineer sometimes tries to help them back into the hive, but that’s just putting off the inevitable. 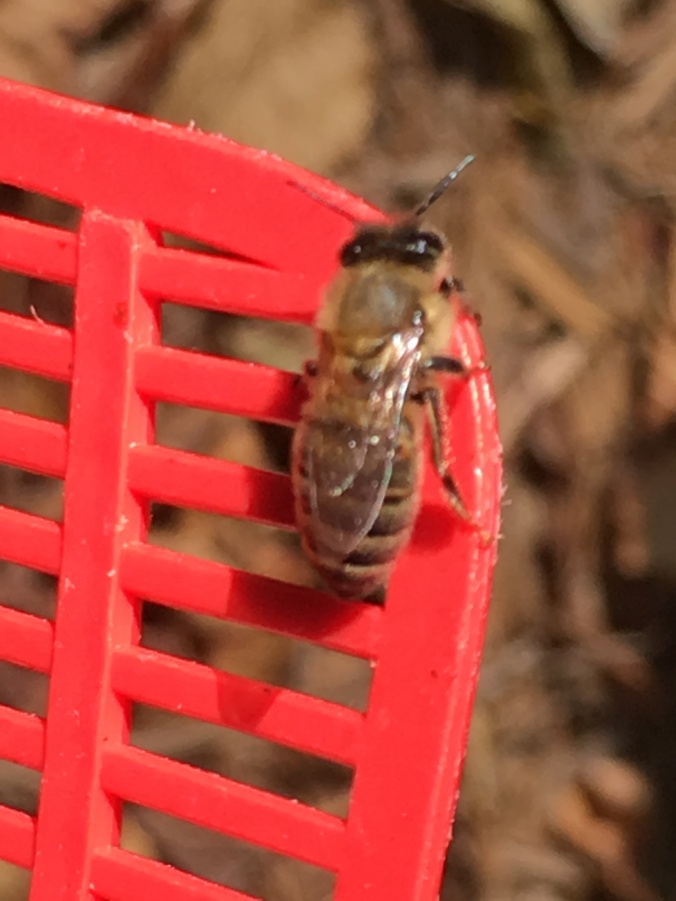 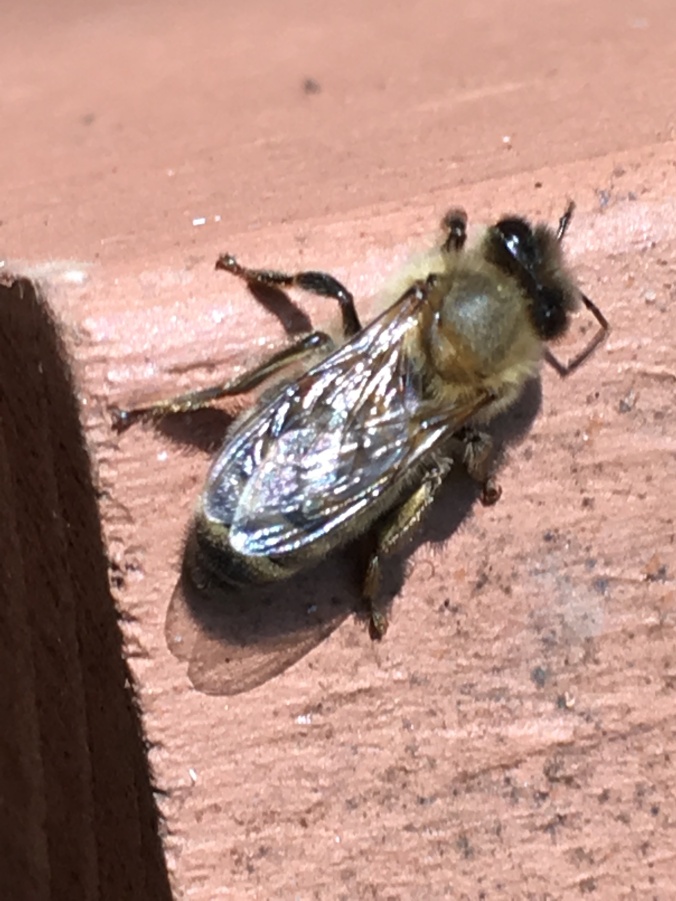 This one is missing a leg.

Honey bees truly live to support their hive. My wish is that we’ve been able to fumble our way through supporting them well enough so they make it through the winter.

I fear the odds are against us.

I can’t say they didn’t warn us. At our Intro to Beekeeping class, the teachers all said the Varroa Mite population would explode in the late summer and fall.

They were right. Although our sugar roll count in late August seemed borderline, our bee guru thought our bees needed treating.

On her advice, we began by putting in two drone frames and dusting the brood boxes with powdered sugar. Supposedly, the powdered sugar encourages bees to groom themselves and each other, thereby clearing away some of the mites.

Well, maybe. The sticky board count afterwards was unequivocally bad, though part of that might be due to the bees’ hygienic efforts. And our bees did build some drone comb on one board, resulting in about 15-20 capped drone cells. (If you recall, Varroa prefer drone larvae because they are larger, and their growth cycle more closely matches that of the Varroa). 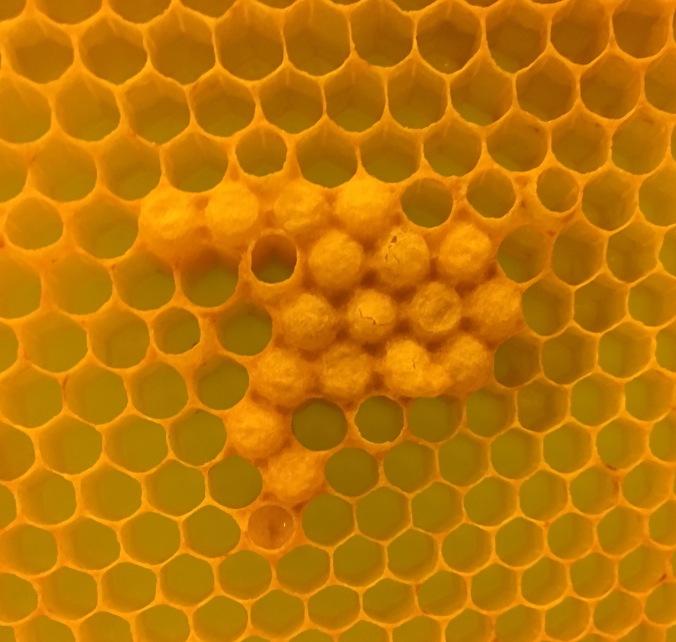 You remember drone cells, right? They look like Kix cereal.

The important thing about using drone frames is to be sure to take it out after the cells are capped but before the bees (and Varroa) hatch.

I’m going to repeat that yet another time because it’s really, really(!) important. YOU HAVE TO REMOVE THE DRONE FRAMES AFTER THE DRONE CELLS ARE CAPPED BUT BEFORE THE BEES AND VARROA HATCH! Otherwise you have a drone population explosion. Worse, you’ve just created a Varroa bomb in your own hive.

After you remove the drone frames, you uncap the cells. Here’s what we found. See those little specks?

I’m pointing to one with my uncapping tool below.

Those are Varroa Mites. They carry deadly viruses and can lead to a colony’s die-off. (Click the link for more information from MSU’s Pollinator Initiative).  It was horrifying to see so many in such a small part of our hive.

Next year, we’ll be putting in drone frames as soon as our queen starts laying. This year, however, we’ll be inserting Mite Away Quick Strips as soon as the weather cools. These have a good track record of treating Varroa and Tracheal Mites in both capped brood and   the bee population. They can also be used while honey supers are on.

The downsides? They can’t be used if it’s over 92 degrees, and they have to be on the hive for at least seven days. They also get expensive if you use them regularly.

We planned to insert them yesterday, but the weather’s been hot for this time of the year, with expected highs in the upper 80s this week — too close to 92 to risk it.

There are some other concerns:

Still, I don’t believe we have a choice if we want to give our girls a fighting chance to get through the winter.

I’m starting to think beekeeping is a continuous cycle of choosing the lesser of two evils.

Other news on the pest front: our Beetle Jails  continue to catch Small Hive Beetles. When we first received the Jail and Beetle Blaster in our Ohio State Beekeepers Association Apiary Diagnostic Kit, we baited them with apple cider vinegar and caught nothing.

Then we tried the recipe printed in the “Monitoring for Sustainability” handbook (also in the OSBA APK). I’m sharing it below because it works. In fact, the Beetle Jail, paired w.ith this recipe, has been so effective, I invested in several more traps. So here’s the recipe: one slice of banana, one spoon of high protein brood builder (I’ve been using pollen powder substitute), one spoon of honey, a pinch of yeast (they prefer Brewer’s, but I had regular bread yeast, and it’s worked fine), and a spoon of water. Let ferment overnight, mix well, and put a few drops in each trap.

And go for the Beetle Jail traps. The other ones don’t work as well.

I’ll let you know how the MAQS treatment goes.

An unusual defensive strategy, but limited to Japanese honey bees.

For your viewing pleasure, here are a few photos of bees working the Jewelweed and Goldenrod in our yard.