When we last checked the hive, we added a honey super. Like all decisions regarding our girls, we weren’t sure if this was the right decision or not, but I read in a blog post (that I won’t link to here), you add the super when the second deep box has 6-7 full frames.

Our second deep had 6-1/2.
We added the super and took off the feeder as instructed in our beekeeping class.

When we went inside, I checked my email and found an update from the Ohio State Beekeepers’ Association reminding us we were coming up on a nectar dearth the end of July and into August.

Well, shoot! We’ll be gone during some of that time period. Would our bees starve now we’d removed their feeder?

Again, I turned to our Bee Guru, shooting her an email. When I got the reply that I should maybe call her, I knew we’d made the wrong decision.

She advised us to go back in the hive, take off the super, set up the feeder (again) and rearrange the frames to encourage the bees to fill the ones they’d ignored. And time was of the essence.

The only time The Engineer and I had available was early morning, before the sun hit our hive. (Although it’s in our yard’s most advantageous spot, we live in the woods and it doesn’t receive the ideal amount of sunshine.)

From what we’ve learned, it’s best to work the hive in the afternoon, when most foragers are out and there are less bees. Early morning was not a good time to be doing what we needed to do, but neither of us would be home to do the work later.

There were many, many, bees around, and they weren’t happy to be disturbed so early. Who can blame them?

We did what needed done, carefully, but as quickly as possible, and closed the hive. Then, we set about lifting the ones that fell to the ground back to the entrance of the hive. The area around the hive is mulched, which means we were picking up any piece of wood with a bee on it and lifting it to the entrance so the bee could would scurry back in the hive.

Here I should note that many — possibly most — beekeepers work without gloves. I lack the confidence to do this, but had taken mine off for the “mulch rescue mission.”

You know what’s coming, don’t you?

As near as I can recall, the piece of mulch I picked up had not only a bee on the top — the one I was rescuing — but also one on the bottom, who felt a threatened when a giant hand closed around her.

Reader, she stung me.

I did what you’re supposed to do:
Remove the stinger.
Take off your ring.
Take a picture.

Okay, the last action isn’t in the manual, but I thought my first sting as a beekeeper was a moment worth remembering.

My finger didn’t look too bad at first. Eventually my knuckles disappeared, and I couldn’t bend them. I probably should have taken a picture of that stage, but I was too busy whining.

It wasn’t a good day, not because I get stung, but because I felt like our bees deserved better than our fumbling attempts to help them grow a hive strong enough to last the winter.

And yet, by that evening, they appeared to be back to normal, bustling in and out of their home and attending to business.

Again and again, I am amazed by these incredible creatures.

Bees, like other creatures, need water. According to Kim Flottum, editor of Bee Culture magazine, they use it to dissolve crystallized honey, to dilute honey for food for larvae, and evaporate it to cool the hive. They also enjoy a cool drink on a hot day. (For more on the subject, see “Why Honey Bees Need Water” from the “Bug Squad” blog.)

In our beekeeping class, the teachers stressed the importance of a water source when deciding where to place a hive. Since we have a stream that runs sporadically on our property and maintain a birdbath full of fresh water for the birds even in the winter, I figured we had the water source covered.

But for the first month or so, we didn’t see any bees on the birdbath, and I assumed they’d found water elsewhere.

Well, guess what! They’ve discovered the birdbath!
I was so excited I went out to take a picture. 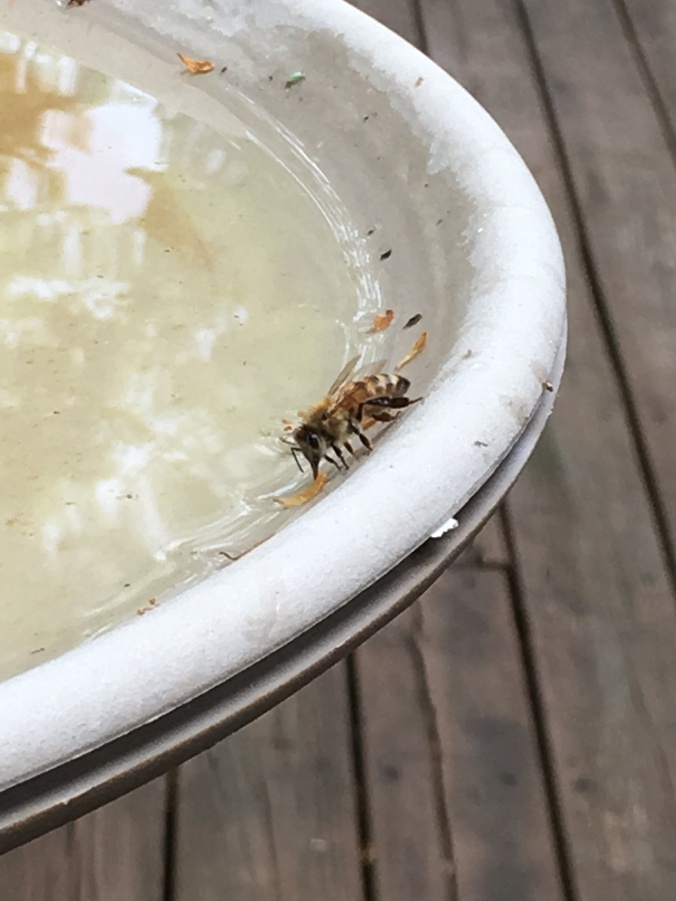 Then I crept closer and took another. 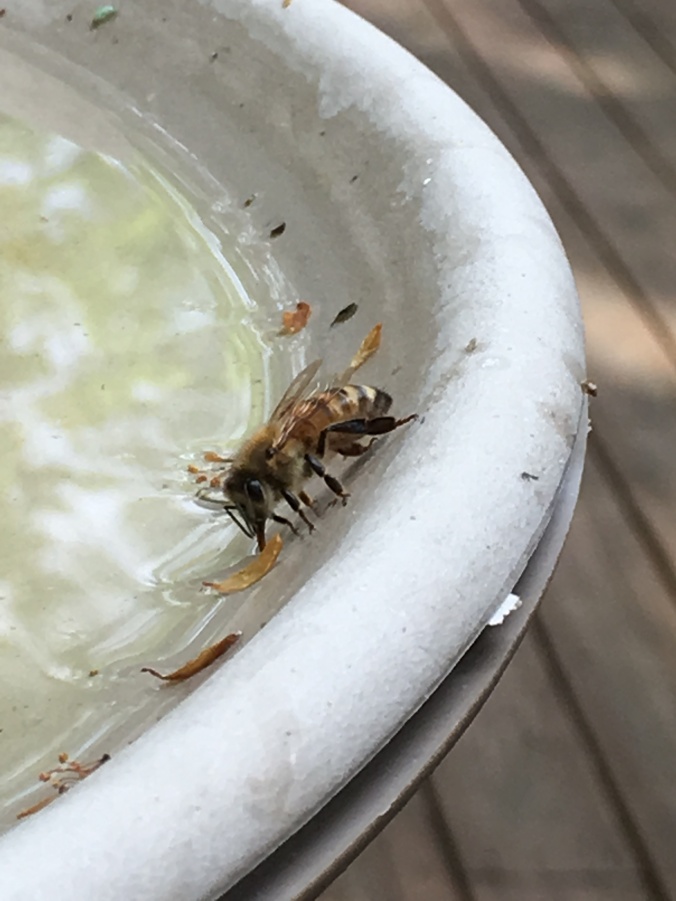 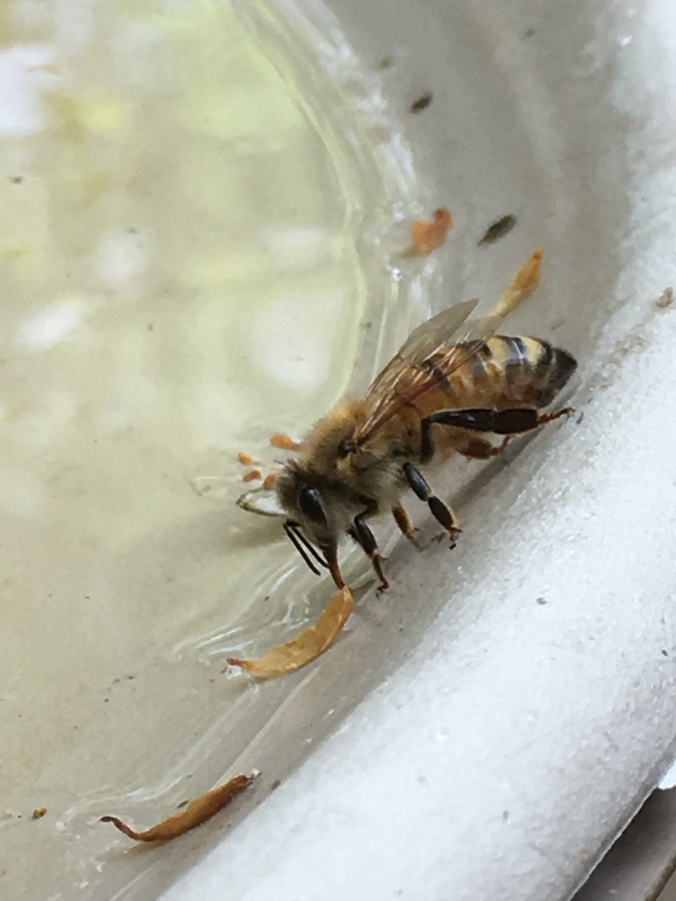 I’ve been taking pictures of thirsty bees ever since. But I promise, this is the last I’ll share.

Then we did our hive check on Sunday, and once more, I freaked out over something that turned out to be nothing.

You see, as soon as we opened the hive, there was a nasty little beetle staring right at me. I tried several times to smash it with my hive tool and missed. The darn thing ran right back into the hive.

Beetles, if you don’t know it, lay eggs that turn into larvae capable of turning a hive into a slimefest faster than you can imagine.

So, of course, I immediately imagined anything that glistened was slime. I was so creeped out I sent this picture to the Bee Guru. She said it was just nectar and pollen.
Whew! 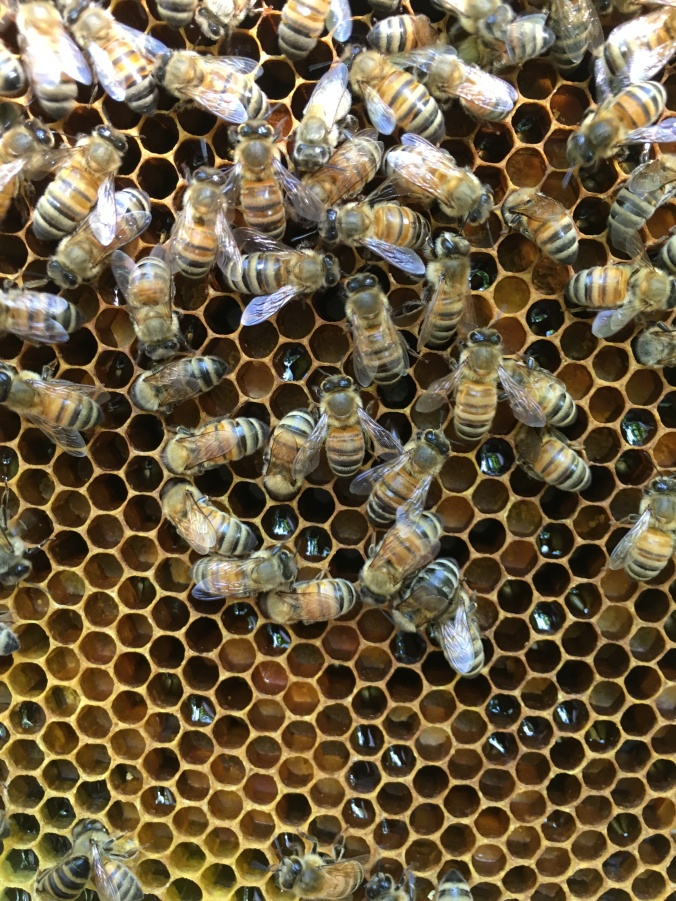 I’m not completely stupid. The frame above looks vastly different from the one below from a few weeks ago. Don’t you think? 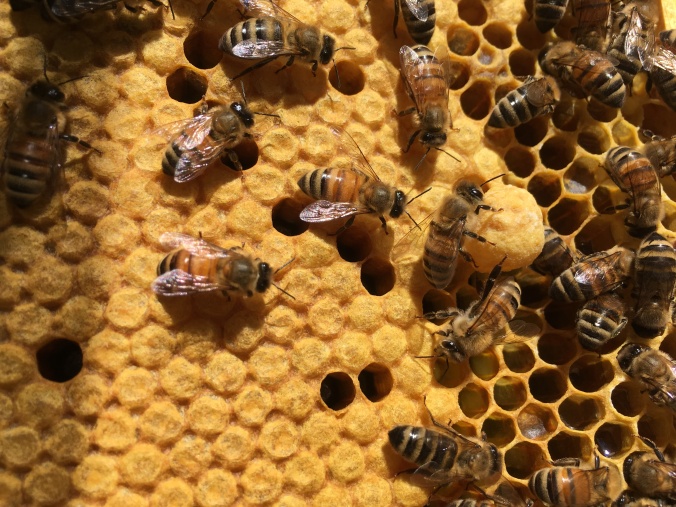 We’re quickly discovering that beekeeping is an education in how little we know.