But first, the bad news. On Sunday, The Engineer had to put a screen over the entrance of the Kremlin because it was being attacked by robber bees. Today, when we checked the hive, we discovered the assault must have begun while we were gone. It was devastated, with few bees remaining — certainly not enough to grow into a viable hive in time for winter.

So, we are down to three hives, all of them originating from last spring’s Saskatraz package.

The good news is all of them are queen right.

Eager for a lift of spirits after the disheartening discovery in the Kremlin, we turned to OH Girls Split #1.

This is the hive that had two queens when last we looked.

Today, we — and by “we,” I mean The Engineer — spotted only one. I suspect the original dented one who began this dynasty is probably dead.

Thankfully, her good genes continue their reign in each of our three hives because each is queened by one of her daughters.

Here’s one of her beautiful offspring in OH Girls Split #1.

The residents of this hive have been toiling hard while we were gone, building comb on the new frames we gave them before we left. There was even capped brood on one of them already!

I love the way new comb looks — so fresh and perfect.

Below, you can see one of the hive’s many frames of capped brood.

Next, we turned to OH Girls and OH Girls Split #2. The split was made at the end of June, and we weren’t sure which hive ended up with the queen. We checked the original OH Girls first.

It’s big, two deep brood boxes and three honey supers. There were a lot(!) of bees. With a hive this size and well-populated, it almost seems like they are just boiling up out of the hive.

It was also filled with many frames of capped brood, which means it is queen right. Yay!

I admit I’m pathetic when it comes to spotting queens, but I don’t know how anyone can find them in a hive this full.

But Engineer found this one too. She’s golden, so might be the queen from OH Girls. Or, maybe she’s just another golden queen.

Here’s three photos of her. Can you find her in all of them? (And don’t go all smug on me if you do. It’s easy when you’re only inches away and it’s a still photo.)

So … did we also find a queen behind door (hive) number three?

No, we did not. However, we found something almost as good. Capped brood, and lots of it!

This is what I mean by bees just kind of boiling up. It’s like they coagulate or something!

In other good news, all three hives have begun storing honey in the corners of some of their brood box frames.

We hope to see more of this as they prepare for winter, even if it means they pay less attention to the honey in their honey supers.

OH Girls still has three of these smaller boxes, and many of the frames are nearly fully capped. We didn’t pull any of them today, opting instead to wait and see how it goes.

Now that we have three queen right hives, I’m sure something else will pop up to torment us.

Oh. Yeah. Winter is coming. Guess it’s time to start worrying about that.

I’ll leave you with this photo of OH Girls Split #1 after we checked it. I’m not sure why they all decided to cluster around their two bottom entrances, but I’m sure they have a reason.

I’ve decided Olga can’t be the queen of our beehive because she’s Russian, and everyone knows Russia was ruled by emperors and empresses or tsar and tsarinas.

I’m going with “Empress Olga,” and the reason I’m mentioning her is because she lives!

The Engineer had a quick peek in that hive today while I was at work, and I’m very impressed that he not only found her, he also managed to capture her on camera.

White and blue are two of the International Queen Bee Marking Colors. The other colors are yellow, red, and green, based on the digit the year ends in.

We’ve had both marked and unmarked queens. When we buy a queen or package or nuc, we pay the extra dollar or so to have her marked. But when we split our hives, and they are successful at requeening themselves, we end up with an unmarked queen.

This is because the only time we tried marking a queen, she ended up dead.

We won’t do that again.

As you might expect, it’s much easier to spot a bee with a colored dot on her back than one without. I’m woefully bad at finding her in any case. Thankfully, The Engineer is slightly better, but there are still many times we don’t see her and have to be happy with just seeing eggs and larvae.

In other news, the workers from the OH, Girls split have been foraging.

And, it’s been very hot (upper 80s and low 90s F), which means the OH, Girls hive is bearding most days. We’ve noticed our Saskatraz hives seem to do this more than the other ones we’ve had.

No doubt the swift change of weather is as much a shock to them as it is to us. You may recall me mentioning (whining about) the snow on Mother’s Day, May 9. Immediately afterwards, the weather turned, and it’s been hot, without rain for the last week or so.

Weather permitting, we plan to perform a more detailed inspection of the Olgas and the OH, Girls split on Tuesday. If there’s any news to report, you’ll read it here first. 🙂

We gave FreeBees a few days to settle into their new location before opening the hive to have a look.

It was lovely. Enlarge the photo to see nearly every open cell with either a perfectly positioned egg or larva. The queen has been doing her job because the hive has about three frames that look like this.

And here’s a closeup of that queen, who we are calling Ziska at the suggestion of my friend Kate. Ziska’s long, tapered body helps her position those eggs right in the middle where they belong. 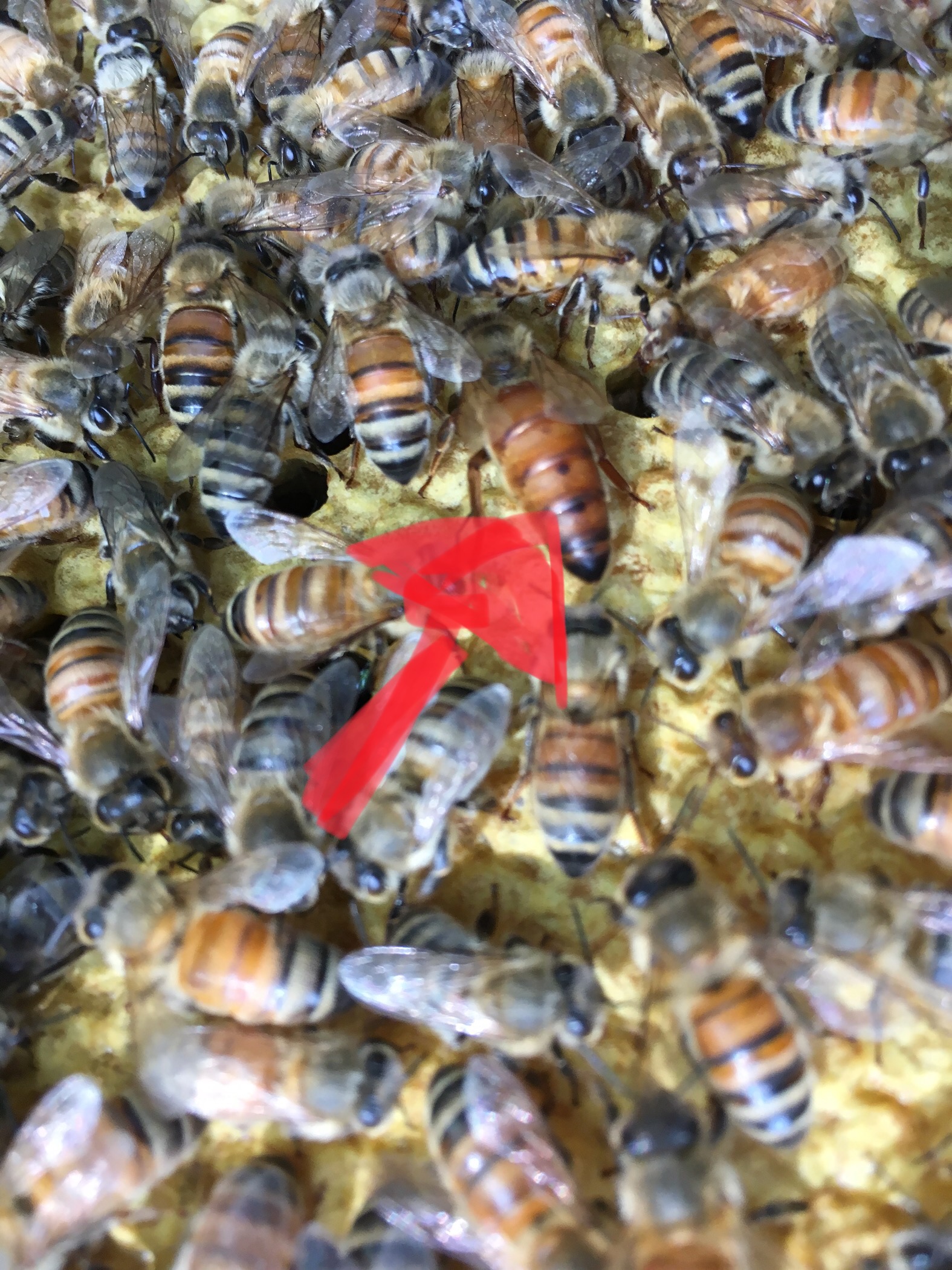 Initially, we planned to use Formic Pro strips for Varroa treatment, but the company rep at field day said a hive needs six frames of bees to do a full-strength treatment. FreeBees has about five.

That was an “Uh-oh” moment for me. Buzzers’ Roost is a small hive, maybe too small for the full MAQS treatment we gave it, which might explain the number of dead bees.

MAQS are similar to Formic Pro, but Formic Pro takes ten days at full strength. The half strength treatment takes twenty. You can’t feed the bees at any time during the treatment, so we chose to use Oxalic Acid (OA). The trade-off is OA only kills Varroa on the bees, not under the caps like the strips.

This means we’ll be keeping a close eye on our Varroa counts and will probably end up using the strips during the early fall/late summer once we know the bees have plenty of their own food.

With OA, you seal the hive before inserting the wand through the large opening of the entrance reducer. The foragers below were trying to figure out how to get back in the hive with the temporarily installed reducer. (Buzzers’ Roost, in the background, also has some entrance activity at its fully open entry.)

The FreeBees foragers are more active than Buzzers’ Roost’s, out and about early each morning until late evening. It rained today, and I was astounded to see some returning and/or going out even in the rain. It was cloudy when we did the OA, but in the 3-1/2 minutes it took to do the treatment, we developed a traffic jam.

Below you can see the bees fanning, bums up, beating their wings to get ride of the scent after we removed the wand.

Later this week, we will add some food to this hive to help the girls as they build comb and raise babies. We’ll also have a peek at Buzzers’ Roost to see if they’ve accepted the queen and whether or not she’s laying if they have. They still had some honey, but we’ll check to see if they need fed as well.

Until then, Bee happy!

P.S. I’m not sure if I mentioned it before, but these are Saskatraz bees, just like our most recent queen in Buzzers’ Roost.