Here’s a healthy bee, foraging on the dandelions in our yard this weekend. 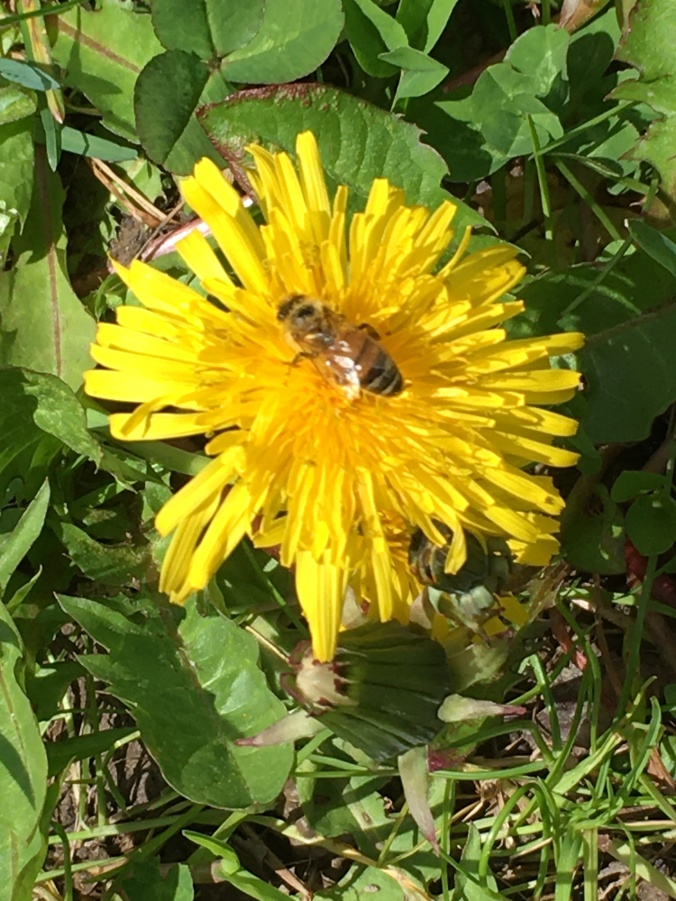 Here are some of the bees we found piled outside the Buzzers’ Roost (II) entrance this morning. 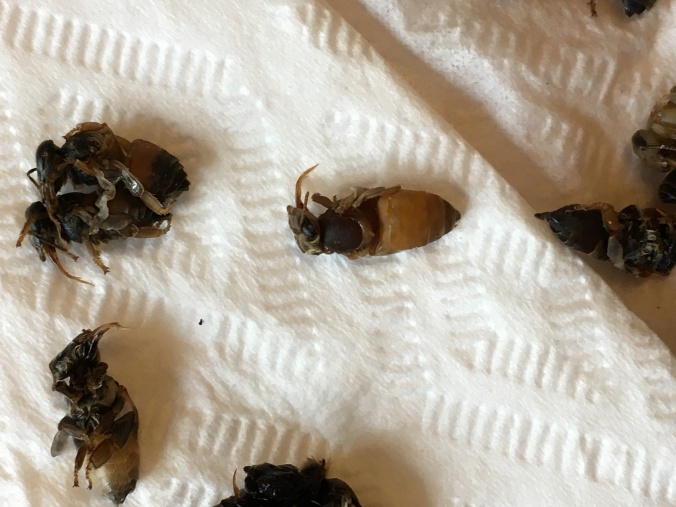 We’ll start with the obvious: They’re dead.
Also, they don’t look too good because they’ve been out in the rain.

Nearly every bee has its tongue (proboscis) out, which tells us they almost certainly died of pesticide poisoning. The second indicator is the many dead bees suddenly appearing outside the hive.

Since our hives are directly in sight of the house, we know the dead bees appeared overnight, littering the ground Sunday morning, with more on Monday, and many left on their front porch when we got up today.

Another symptom, which indicates the bees died after foraging on treated plants, rather than drift from someone’s “treatment,” is the fact that the other hive seems fine.

Since we live in a semi-rural area, surrounded by a few farms and many developments full of McMansions, the poison could have been sprayed on a crop or someone’s ornamentals.

It doesn’t matter. The bees are dead either way.

The hive still has a fair amount of bees, and they continue foraging, which is a good sign. They may recover from this.

And yet, this is a young hive, a nucleus hive, which means it’s small, just starting to grow into a full-sized colony. This poisoning will weaken the hive, making it more difficult to fight off the everyday bee pests — the hive beetles, the Yellow Jackets, and the dreaded Varroa Destructor, as well as any infections the bees may encounter. It’s equally likely the hive may not recover.

I’m disheartened and angry because I believe (completely without reason) someone saw a beetle or aphid on one of their plants, and couldn’t be bothered to learn how to treat those plants without killing my bees. Instead, they blasted their yard with insecticide, killing every insect around.

Yes, I’m being irrational, but how unfair that our hardworking bees – who do much to help pollinate everyone’s food source – are dying simply because they landed on a flower.

They’re bees. That’s what bees do. They fly from flower to flower, gathering nectar and pollen.

Like most people, I get annoyed when beetles munch on my plants. And a true creature lover might argue even beetles deserve to live.

I am not that person, and I don’t expect you to be either.

Here are links to a few lists:

“8 Natural and Homemade Insecticides: Save Your Garden Without Killing the Earth” (or the bees) from Treehugger

It can be done.

And now, I’d like to ask you to give special attention to two particular types of chemicals commonly used in home gardens and yards;  neonicotinoids and glyphosate (commonly marketed as “Roundup”).

First up are the neonicotinoids, initially praised for their “low toxicity” to beneficial insects including bees. Alas, this has not proven to be true.  Although neonics don’t kill hives outright, they have been correlated to a shorter lifespan for bees, and higher incidence of queen loss.

This is Buzzers’ Roost’s queen.  We’d like to keep her.

The pesticide is also systemic, which means it leaches into all parts of the plant, not dispersing after the plant blooms.

For a more detailed report, read the Xerces report.

Neonicotinioids have been completely banned in the European Union since 2018.

The U.S., on the other hand, only recently banned twelve of them, leaving 47 still in use.

What you can do: Ask your gardening center which plants are not treated with neonicotinoids, and plan your plantings accordingly.

Next, we have glyphosate (commonly marketed as Roundup). Glyphosate-based products have been marketed as safe, but there have been several lawsuits settled in favor of plaintiffs who said using the chemical caused their Non-Hodgkins Lymphoma. And there are more in the pipeline.

Studies are also now showing the chemical also affects bees’ health, specifically their gut biome. It also appears to affect their ability to find their way back to the hive.

Glyphosate is also finding its way into local streams and our water supply.

Is the death of a few dandelions worth this kind of damage?

So, when you pull the trigger on that insecticide bottle, remember you may also be pulling a trigger on your food and water supply, your health … and our bees. 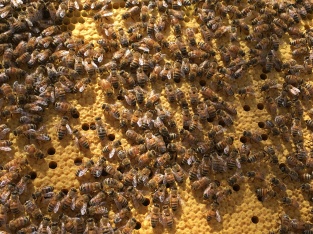