It’s been a weird few weeks, I think we all can agree. In all my born days, I never could have predicted something like coronavirus could scour the world as it has.

That’s not quite true. I’ve predicted a pandemic for years. I just never believed it would happen.

I find it hard to believe even now, even though I know it’s gone way beyond weird to tragic.

So many people are sick and dying, while so many more are unable to work.

Meanwhile, our so-called leaders can’t even manage to pass a bill to help those who need it most.

My answer: Do something now to help our country’s citizens. Argue about how to the big corporations later. And be sure to factor in more accountability than the last bailout.

But, this is not a political diatribe.

We can get through this.

I know this because I study the genealogy of my family, and I know my ancestors made it through their own horrors.

There was Sarah Jane Daugherty Feathers Scott who married at nineteen, only to lose her husband in the Civil War shortly after the birth of their first child. Her three brothers fought in the same war, one for the Confederacy and two for the Union. All came home safely, but one died before the age of 20 from an accidental gun shot. Sarah later remarried and had seven more children, with four of them dying before she did. And yet, she and her second husband, Amos, took in and were raising three of his siblings the year before her death. Sarah was the sister of one of my 2x great grandmother, and her first husband was the brother of one of my other 2x great grandmothers.

Sarah’s brother Jacob was the one who fought for the Confederacy. He and his wife Julia lost two children within eighteen days of each other at a time when their home counties were in the process of seceding from the Confederacy to become what is now West Virginia.

On the other side of the family, there was John Garman and his many children. And you already know about Montcalm.

And I can’t forget about my Great-grandfather Lang, who was an RFD mail carrier, carrying out his rounds on a mule in West Virginia. If you’ve ever been to the hollers of that state, you can imagine what that must have been like, especially in the winter.

There was my Grandpa Byrd, who dug ditches for one of the Federal works projects during the Great Depression so he could feed his family.

His father, Andrew Warren Bird (the spelling varies) and mother, Clara Olive Summers (one of my favorite names ever!) lost a child, Mary A Bird, in 1898. She was only twenty months old, and I came across her by accident when I was looking for the death record for another Byrd/Bird. It says “caught fire from open grate, never rallied.”

Every time I read that phrase, I get tears in my eyes. 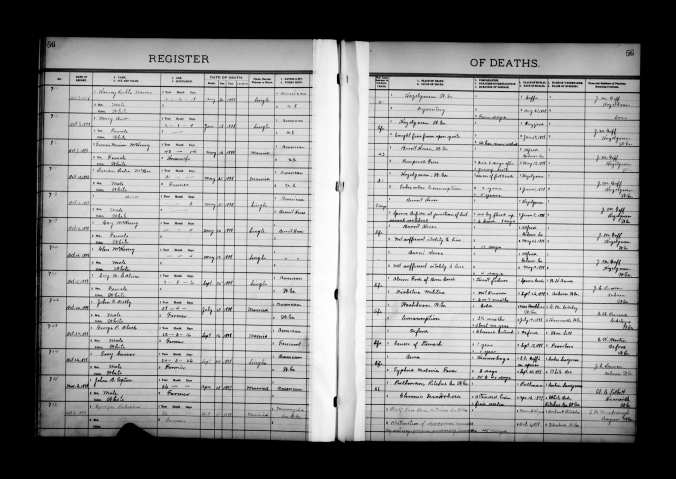 Still, Clara and Andrew soldiered on until Clara’s death at age 66 in 1938. Andrew lived to the age of 96, remarrying a woman 41 years his junior when he was 78, although — and I find this detail amusing — he claimed to be a sprightly 72 to Alice’s 37.

Alice’s life was a difficult one. She was first married at 15, to a fifty-two-year-old man, with whom she had nine children.

Writing that makes me cringe, though the nine children and the fact that Andrew bequeathed his land to her on his death makes me think theirs was a marriage of economical necessity.

She died at seventy-five, having married a third time, this time to someone closer to her age (only six years older).

Although she isn’t my direct ancestor, I find myself hoping her life with Andrew was a pleasant one, and that the acreage she inherited enabled her to achieve some independence after what sounds like a life of drudgery.

My parents also knew challenges, growing up in the Depression, and that experience was reflected in how my siblings and I were raised, with a big garden and two large cupboards in the basement, filled with home-canned food.

Grandma and Grandpa Byrd would come to stay for a few days in the late summer or fall to help, but we were all expected to contribute, by lugging water to the garden, stringing beans, pushing apples through a ricer to make applesauce, or washing dishes.

The first time I made and canned jelly, I was so proud of myself, feeling like I was maintaining a connection with my parents and grandparents.

Then I realized if Grandma could look down from heaven, she would be laughing at me — so smug about over a few jars of jelly.  She, along with Grandpa and my parents, would churn out seemingly endless jars of multiple varieties of jelly every year, along with applesauce, green beans, tomatoes, tomato juice, grape juice, peaches, pears, plums, and more.

So, here’s the thing: I come from a long line of resilient people. They suffered the deaths of spouses, siblings, and children, lived through wars and the Depression, and raised their children. Every generation has had its challenges, and yet, we persevere.

Your family’s story is probably similar, though you may not know its “narrative.” This might be a good time to learn some of it because research shows that such knowledge makes a person more resilient. (If you’d like to read more about this study, there’s a good artice in the New York Times. )

It makes sense. If a person knows their family’s stories, they know that there have always been difficult times, and that people — not all of them, obviously, but many — manage to find a way to survive. When we know that, it makes us more confident we will find a way through our own hardships.

We can do that best, I believe, by learning to depend more on ourselves and on each other, even though right now that interdependence with others must, of necessity, be from a distance.

Though we may not be able to deal with difficulties in the same way as our ancestors, we too will find our way through.

Also, I take heart from two of my favorite quotations.

“You must be the change you wish to see in the world.” — Ghandi

“Never doubt that a small group of thoughtful, committed citizens can change the world; indeed, it’s the only thing that ever has.” — Margaret Mead

We don’t have to do everything to fix things. We just have to do something, preferably something that takes us out of ourselves and helps others.

So, be kind. Check in with friends and neighbors.

4 thoughts on “Our Ancestors: We Know We Can Make It Through Because We Know They Did”