Montcalm was my 2x great grandfather, born in 1843 in Wayne County, Ohio on June 30 (calculated by the registration of his death, though Ohio, Soldier Grave Registrations, 1804-1958 says May 30 and findagrave.com says January 29.)

The sixth of ten children, he grew up in Napoleon, Henry County, Ohio. His father was a carpenter/joiner/cabinetmaker, and Montcalm followed in his footsteps, working as a carpenter.

Montcalm didn’t reach 40, dying less than a month before his birthday on June 14, 1883. Whoever indexed the death registration mistakenly wrote his name as “Montealm,” a type of error that’s common in genealogical records.

Also, the person who recorded his death couldn’t spell “diarrhea.”

Even misspelled, “chronic diarhea” gets the message across.

When I discovered what caused his death, long before I found this record, I was aghast. His pension records (kindly shared with me by a distant cousin) mention “complications of dysentery.” I looked it up and remember thinking, “That’s basically dying of diarrhea,” something almost beyond my comprehension.

Montcalm suffered from 1865, when he was discharged from the Army, until he died. His pension records reflect this, with the illness also affecting his back and one leg. From what I’ve read, amoebic dysentery can cause postinfectious arthritis, so perhaps that’s what the problem was.

A little over a year later on September 8, 1863, he was captured and confined as a POW at Belle Isle, Virginia, until March 15, 1864, when he was admitted to the hospital (possibly Annapolis — I can’t make out the writing — cause not given).

The National Park Service record of Montcalm says “Held at Andersonville and survived.”

Those five words describe a world of misery.

This was a month before Montcalm was released.

To put it bluntly, it was a freezing kind of hell.

“In a semi-state of nudity…laboring under such diseases as chronic diarrhea, scurvy, frost bites, general debility, caused by starvation, neglect and exposure, many of them had partially lost their reason, forgetting even the date of their capture, and everything connected with their antecedent history. They resemble, in many respects, patients laboring under cretinism. They were filthy in the extreme, covered in vermin…nearly all were extremely emaciated; so much so that they had to be cared for even like infants.”
— Lucius Eugene Chittenden, U.S. Treasurer during the Lincoln Administration, quoted at https://www.battlefields.org/learn/articles/civil-war-prison-camps.

Looking at the table below (from http://mdgorman.com), it’s clear provisions were in short supply.

If you want to read further, the same site has links to a variety of information on the camp. You might start with this report, written nine days before Montcalm was released.

I was going to include this photo from the Library of Congress of a prisoner on his release from the camp (initially identified incorrectly as Andersonville), but couldn’t bring myself to do so.

I’m not sure how I feel about that. I mean, it sounds lovely, I’m sure, ideal for kayaking and cycling, but don’t you think the description should mention the historical significance of the site? A lot of men died there, and I’m sure there were others like Montcalm, who died as a result of being imprisoned.

Shouldn’t that be worth a line or two?

For now, let’s focus on the fact Montcalm lived, or “survived” might be a better word.

He went back to Ohio, married Emma J. “Jennie” Price in 1866. She was twenty; he was just twenty-two, but after what he’d been through, he could hardly be considered young.

Look carefully above, and you’ll see there are two parts to marriage records, the license and the return beneath it. If the bottom part hadn’t been filled out, we’d have no proof the marriage ever took place. In this case, it did. Emma and Montcalm were married by Mr. A. H. Tyler, J.P. (Justice of the Peace).

Emma died in September, 1870, at age 24, leaving Montcalm a widower with a one-year-old and three-year-old to care for.

He remarried in 1874. From the record, you would think he married a woman named Anna Seitner, and when I first started doing genealogy, I believed that was her name. However, my mom kept talking about someone named “Lightner.”

I never connected the two until we took a road trip to Napoleon, and in the clipping files of their library, we found records connecting Anna Leitner and Montcalm.

My big contribution to the genealogist community was sharing this discovery. These days, “Anna Seitner” rarely makes an appearance in the Armstrong family trees I see.

Luella and Jennie May were fostered out to other families.

In 1880, Ella was with Addison and Sarah Crew in Swanton, Fulton County, listed as “adopted. Six years later, when she married Arthur Sweeney, she again uses the name “Ella Crew.” However, we know she is Ella Armstrong because when she died in 1940 in Michigan (age 73), her death certificate, listing Arthur as her husband, gives Montcalm as her father, and “Price” as her mother.

I would like to claim I figured all that out by myself, but I followed the bread crumbs left by other genealogists, verifying and adding details as I went.

As for Jennie May, from my copy of Montcalm’s pension files, I know she was born in Napoleon on July 28, 1869.

In 1880, she was listed as “Jane Armstrong,” adopted daughter of Levi and Hannah Serrick, living in Clinton, Fulton County. Claiming to be 16, using the name “Jennie Serrick,” she married Wallace Wagner (age 21), a neighbor of the Crews. If my dates are correct, she was actually 15. According to the bread crumbs and family lore, she divorced Wallace in 1892 because he sold her horse without asking.

I have no records to prove these facts, but Wallace did remarry in 1893, and by 1900, Jennie was living as Jennie Smith with Andrew Smith in Lucas County, raising poultry. When she died in 1927, the death certificate listed Levi Serrick as her father, and gave her birthdate as July, 1869 and birthplace as Napoleon, Ohio.

As we know, Montcalm died in June 1883, leaving Anna with four children. He wasn’t approved for a pension until 1881, leaving me to wonder how the family survived. The same pension was later assigned to Addison Crew, after he became Alba’s guardian.

Anna married again in June 1884, this time to a man named Charles F. Harrison. They had five children together.

Unfortunately, the 1890 census was mostly destroyed by fire, so it’s difficult to trace what happened to the rest of Montcalm’s children following his death.

The same distant cousin who sent me the pension file told me that Guy ended up in the Ohio Soldiers and Sailors Orphans Home at the age of 10.  (His application was dated July 21, 1890.)

In the 1900 census, he was back in Napoleon with Anna, her second husband, and their children. In 1910, he was living with Anna’s brother, Samuel and his family in Michigan and working as a carpenter. He married Lettie Taylor in 1911, dying in Michigan in 1950.

One of Guy’s granddaughters contacted me via Ancestry.com for any information I had on him. When I told her he was a carpenter and had been in care, she said that made sense because one of the few things she remembered about him was he was good with his hands and liked to make things. She didn’t know he’d been institutionallized.

Montcalm’s youngest child, Alba, was also farmed out to Addison Crew, and in 1892, Addison was awarded her pension.   By 1900, Addison was dead, but “Alba Crew” remained with his widow Sarah as her adopted daughter. They lived next door to a branch of the Serrick family, who had also taken in an adopted child.

Alba married August Melching in1903 in Emmett, Michigan, with Guy as one of the witnesses. (As usual, the record is mis-indexed, listing Montcalm as Mort C.) Alba died at the age of 72 in Michigan.

This adopting/fostering out of children shows up in other family records. Apparently, it wasn’t uncommon for children to live with other branches of the family or friends when their own parents couldn’t care for them.

Alba’s oldest brother Harvey’s bread crumbs are harder to follow. The next record I found for him was in 1899, when he married Sadie Reninger in Summit County. He  remained there, working as a machinist and rubber maker draftsman until he died of a cerebral hemorrhage in 1928. At that time, he was living on Buchtel Avenue, a street I walked daily when I was in college at The University of Akron.

Odd to think I walked in my great uncle’s footsteps for four years without ever knowing it.

My great grandfather, James Gideon, was five when his father died. The next record I found of him was the 1900 census, where he is working as a servant for Alvin R. McFarlin, in Bath, Summit County. Before you start getting a Downton Abbey type picture in your mind, I will clarify that in this case, “servant” means “farm laborer.”

He married seventeen-year-old Sophia Viola Myers a year later. Below is their marriage record, with the one on the left showing the “permission slip” her father Rolandous had to sign for the marriage to take place. 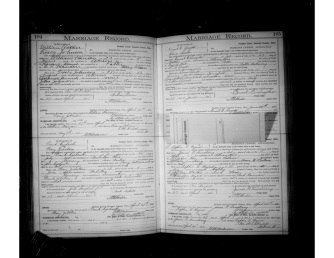 With the permission slip lifted on the right record, you’ll see Summit County marriage records provide the details genealogists love — where each member of the pair lived and were born, their ages, and the Holy Grail of genealogy, their parents’ names including the mothers’ maiden names.

City directories show James and Sophia were still in Summit County in 1907 and 1908, but by 1910, they were back in Henry County in Freedom Township with their two children Harold (my grandfather) and Ethel. Sophia’s brother and James’s half sister Grace Harrison also lived with them.

When I first began researching her family, my mom kept talking about how she remembered her grandfather running a grocery store, and that there was a picture of him in front of it.

She was right. In 1910, James was a “merchant” of “groceries” employing others. He also rented a farm.

Eventually, we found this picture, which Mom says is the store with James in front of it.

By 1920, he and Sophia had moved to Plain Township, Stark County, where James farmed. In 1930, much like my paternal grandfather, he was doing road work to support his family (mistakenly named as John G. Armstrong, but other documents confirm this is the right family).

James registered for the draft for both World Wars, but didn’t serve. The card on the right is from a collection called the “Old Man’s Draft Registration Cards.” If you look at his age, you’ll see why.

I sometimes wonder how and why Montcalm would marry — not once, but twice — and have six children. Did he initially recover enough from his imprisonment to think he was capable of being a proper partner and raising a family? Was he simply trying to live a normal life after what he’d been through? Or was he just trying to find happiness while he lived?

Since there’s no way of answering that question, here ends the stories of Montcalm Armstrong and his six children.

5 thoughts on “The Brief and Difficult Life of Montcalm Armstrong”