If you ask about genealogy, and I talk until your eyes roll back in your head, it’s Montcalm’s fault, although my mom does bear some responsibility.

She’s the one who gave me Montcalm Armstrong’s Civil War discharge paper (below — much the worse for wear because someone scotch-taped it where it had been folded. Big mistake. Never scotch-tape an important document). 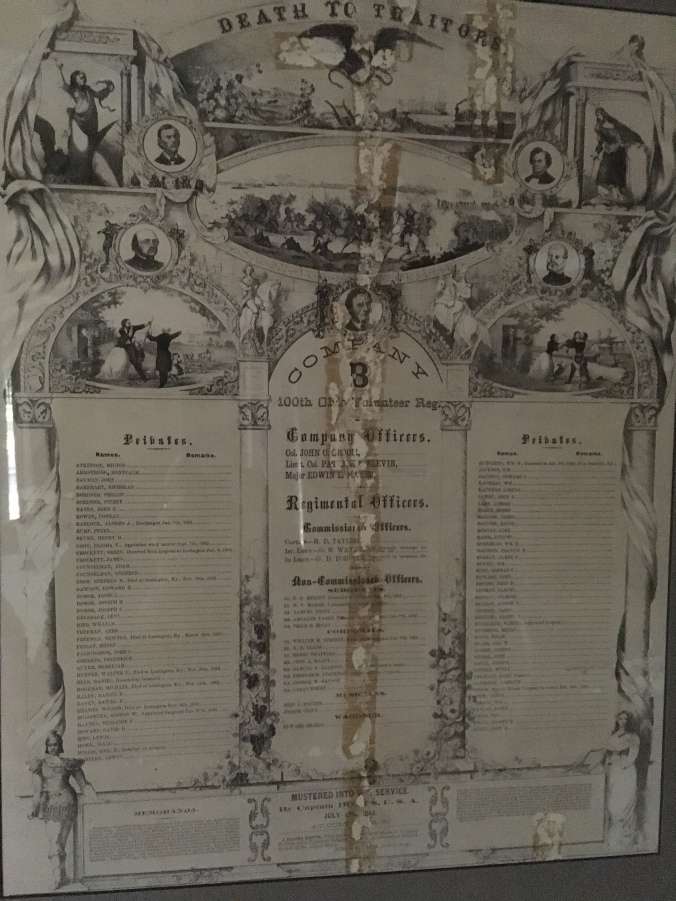 The document was found behind a reverse glass painting of a woman clinging to a cross. Big Brother got the painting, and I, the history buff of the family, got Montcalm, our 2x great grandfather.

My fascination with the man (and genealogy) began when I first beheld this piece of history, long before it became mine.

Genealogical databases had become available via the Internet, and the library I worked for subscribed to one — I can’t even remember which. But, one night when I was working in the computer room, I threw Montcalm’s name into it, and bingo!

I played around a little, doing a general Internet search of his regiment, and found a history of the 100th Ohio Voluntary Infantry.

It was amazing. The information was easy to find, not even as difficult as some  questions I got at the reference desk.

I dropped into genealogy like a stone into a well.

Unlike a stone, I managed to resurface long enough to take a deep breath and realize this wasn’t an interest I could pursue at that time in my life.

Because I quickly learned most ancestors are not as easy to research as Montcalm.

Think about it. Have you ever heard of anyone else with that name? I hadn’t, and when I looked it up, I could only find Louis-Joseph de Montcalm, French commander of forces in North America in the Seven Years’ War (also known as the French and Indian War).

Montcalm’s mother was named Eleanor Pinkerton and his father was James Armstrong. Neither one sounds, nor was, French, at least as far as I can tell.

Given when they lived, my best guess is James may have fought in the same war as Louis-Joseph.

Come to think of it, maybe Montcalm’s parents should be blamed for my immersion into genealogy.

Seriously, Eleanor and James? What were you thinking?

The name is so uncommon I can almost guarantee anyone whose name includes Montcalm and Armstrong in any form is some kind of cousin.

As for having my first genealogical experience be based on the original Montcalm, well, it was false advertising, that’s what it was.

Especially when his father’s name is common as dirt.

Following Montcalm back through the censuses, I learn that James was born around 1804 in Pennsylvania. (The Federal Census often lists ages and birthplaces, though they are inaccurate almost as often.)

Eleanor was born around 1815 in Virginia.
Or Kentucky.
It depends on which census you believe.

Oh, and sometimes she’s called Nellie.
Or Ellen.
Or Elenore.
It varies by document.

And women are harder to trace anyway, partly because of the whole name change thing. Also, they rarely appeared on property records and didn’t usually join the military — just stayed at home, fed and clothed and raised the kids while their husband went off for years.

In short, they didn’t do anything important.

Sorry. I digress.
The point is: Even with an approximate year and place of birth, finding a man named James Armstrong is a challenge.

Because of naming customs, there are many James Armstrongs, born in or near 1804 in Pennsylvania. Below is a list of those from 1850 censuses. 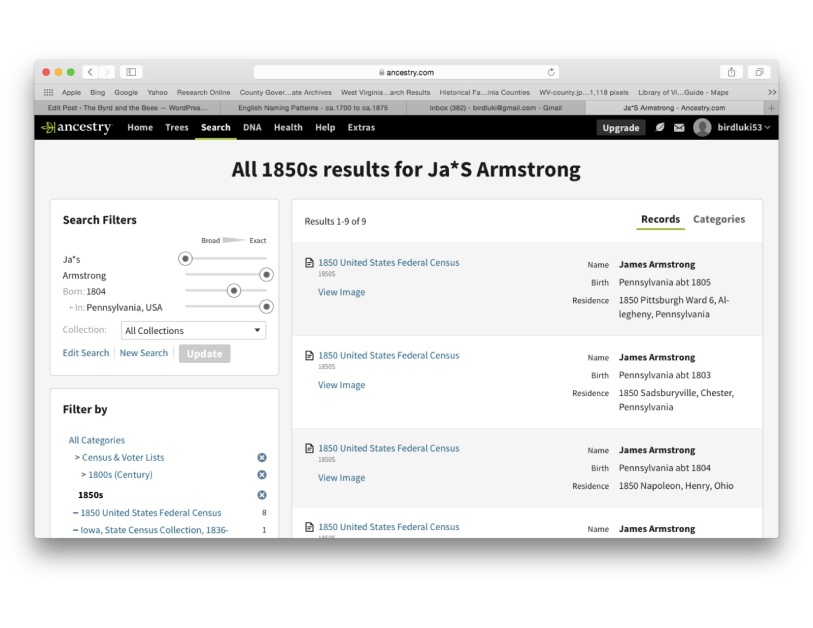 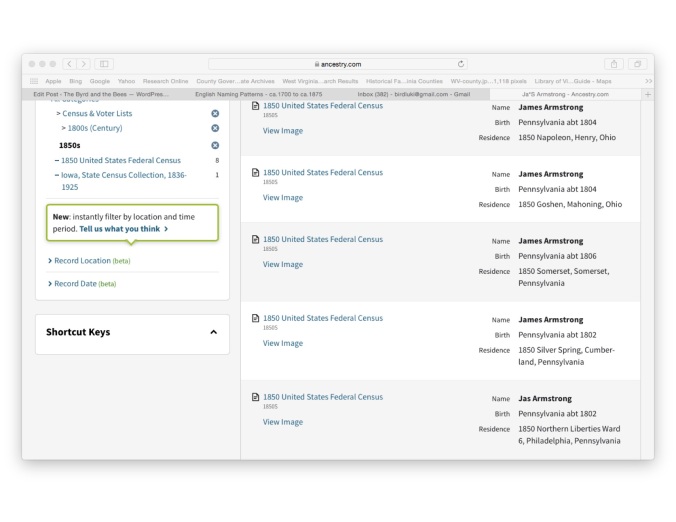 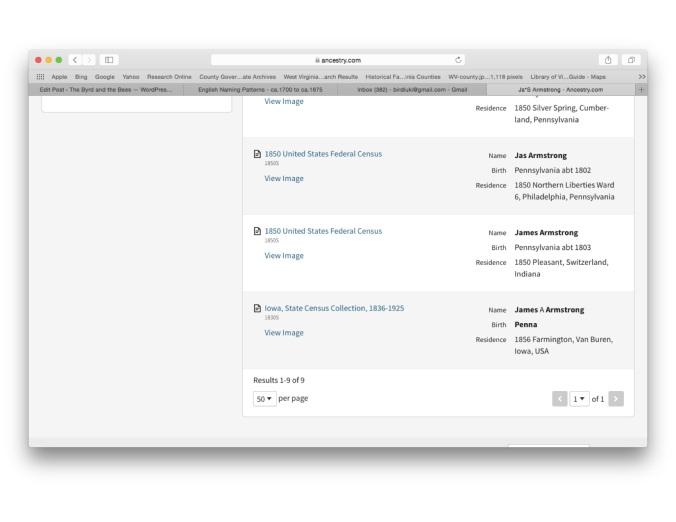 Ours is the third from the top. I know this because Montcalm was born in 1843, and he’s listed with the rest of his family. When I search for him, he comes at the top of the list for 1850, (although I did have to play around with it because it’s indexed as two separate names). 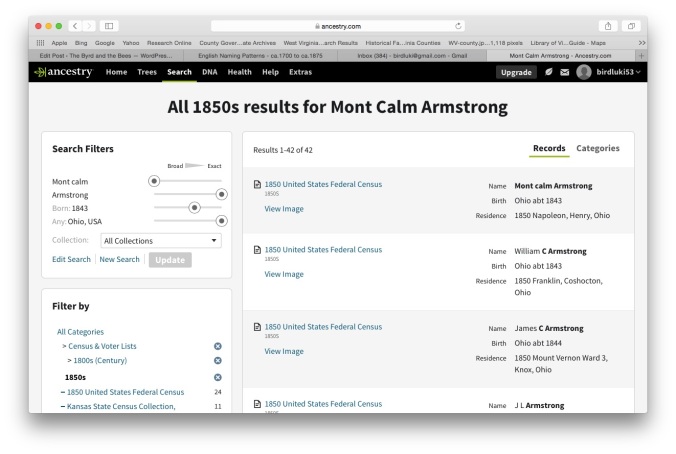 Still, you get the idea. After working downward from Montcalm and back up, I got to James and decided to put my genealogy interest on the back burner.

I had a full-time job and Darling Daughter to raise, and genealogy was clearly an addiction I didn’t have time for.

Things are different now, and you can look forward to (or maybe not) reading more about Montcalm soon.

5 thoughts on “Blame It on Montcalm”