There’s a quote I read about beekeeping that sums up our experience perfectly. I can’t find the exact words, but it’s something like “The more I learned about bees, the less I knew, until finally I knew nothing at all.”

From our last post, you’ll know there was no eggs, no larvae, and very little brood in any of our hives, with FreeBees having gone the longest with nothing in sight.

We used to name our queens but have long since stopped – we’ve been through so many. And if you wonder how much this turnover of queens costs, we pay $42 for a marked Saskatraz queen.

It gets expensive, which is why we were so delighted NewBees raised a queen. (That would be the one who has disappeared. Sigh.)

I’m sure part of the problem is we’re not the best at locating our royalty. The only solution for that is keeping on trying.

So, here’s where I admit I know nothing.

Before we put in new queens, we decided to check the hives one nlast time just to verify they weren’t “queen right” (when a hive has a laying queen and all is copacetic), even though we were pretty sure they were queenless (“queen wrong”?).

Buzzers had nothing, and we’re quite sure there’s no queen. She was marked – therefore easier to spot.

NewBees had nothing either. No new brood, no larvae, no eggs, therefore no queen, despite having all of the above a few weeks ago.

FreeBees was a different story. Not only was there now capped brood, there was also larvae.

After thinking about what might explain the no brood, then brood situation in that hive, I’ve come up with a possible scenario.

FreeBees was full of queen cells when we split it. We took out all but one, which we put in NewBees. Then we went to France. When we returned, NewBees was in great shape, but FreeBees was without a queen.

Or so we thought.

I think FreeBees had a queen, but she was a new queen who hadn’t mated yet, or maybe just hadn’t started laying because I think they swarmed while we were gone, leaving behind the new unmated queen. (When bees swarm, the old queen goes with the swarm).

But what do I know?

Today, we introduced the new queens into NewBees and Buzzers, so it’s possible we may end up with three full hives, which wasn’t our plan.

In fact, next week, we’ll be pulling some full deep frames to store for them and replacing them with empties so they don’t get too crowded.

Below are some photos of the queens in their cages with their attendants before we put them in the hive. Sorry, I couldn’t get a really clear shot. 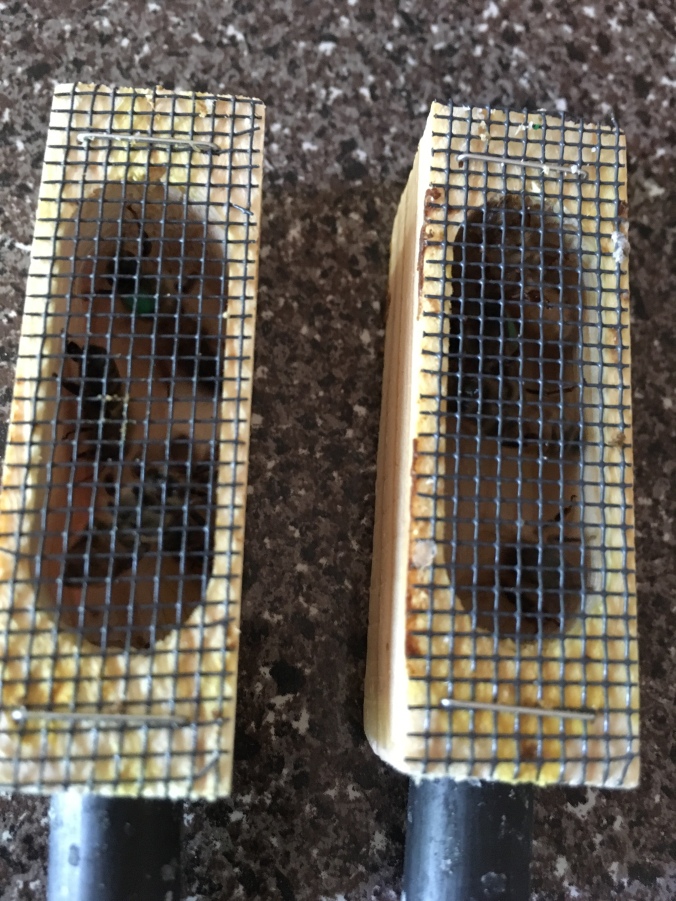 And here are pictures of FreeBees and NewBees hanging out on their front porches due to the heat. This is called “bearding”and sometimes – when there are a lot of bees – it can look like a beard on the hive.

It’s not surprising they’d want to cool off. It’s been in the 90s today, with high humidity. Sitting on the front porch fanning seems a reasonable reaction.

2 thoughts on “Behold, There Was Brood”