Before we took our beekeeping course, I didn’t know about propolis. Obviously I knew bees make honey from nectar, gather pollen, and somehow produce beeswax, but propolis? I’d never heard the word.

In case you’re in a similar boat, here’s WebMD’s definition: “Propolis is a resin-like material from the buds of poplar and cone-bearing trees … Propolis has a long history of medicinal use, dating back to 350 B.C., the time of Aristotle … Propolis seems to have activity against bacteria, viruses, and fungi. It might also have anti-inflammatory effects and help skin heal.”

Bees use propolis to seal small openings and cracks in their hives. Some breeds and hives propolize a little. Others propolize a lot. Italian bees, in particular, are said to be less propolizing than others.

Having no basis for comparison, I can’t say for sure our bees are overly fond of propolis, but they do seem to be rather particular about their hive, and I’ve certainly scraped off a lot of propolis.

Here’s the thing: Propolis is sticky (as one might expect from something made of tree resin), which makes it challenging to clean off a hive tool. However, I recently learned it’s also quite brittle when cold, which makes cleaning much easier. Supposedly people buy it for natural medicine, but I imagine it would take a long time (or many hives) to acquire enough to sell.

Here’s what our supers looked like before I scraped them.

See what I mean?

I should mention bees have also been known to propolize heat-seeking mice that sneak into their hive. If you’d like to see a picture, visit HoneybeeSuite.com.

Beeswax is a different thing altogether. Bees use it to form comb for honey and brood. They also use it to fill gaps and holes that are too big to propolize.

We don’t toss any propolis or wax on the ground (nor dead bees, for that matter) because we’ve heard those nasty yellow jackets will smell it and be even more attracted to our hive. Instead we put both substances into jars for future use.

A few days ago, I finally got around to melting down the was. Below is a picture of two pans. One has the sludge left on the bottom of the pan after warming and then straining the wax. The other has the wax. We had a quart and a 1/2 pint mason jar full of wax, and the strained wax barely covered the bottom of the pan. 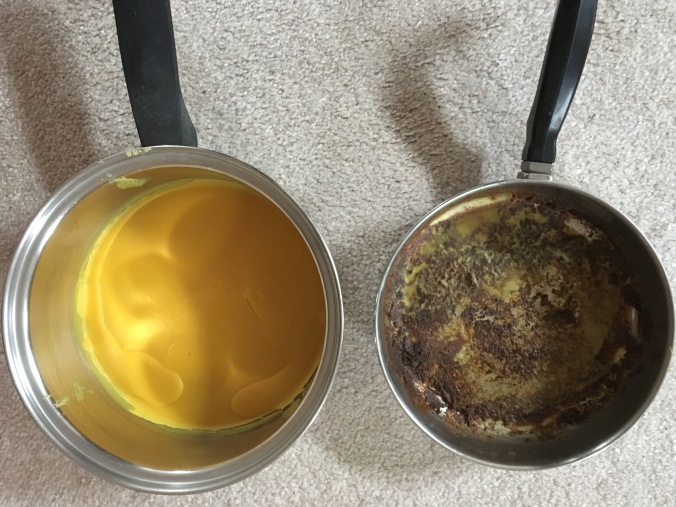 That’s okay. It made the house smell divine, and there’s enough to coat at least one or two frames.

And, hey, did I mention our hive is now wired? The Engineer and I bought raffle tickets at OSBA, and each won two drone frames. Now we have seven, more than sufficient for our single hive, but at least we’re ready for expansion.

I also won a Broodminder temperature sensor, perhaps partly because I paid attention to what it was and put a lot of tickets in the jar. I think most people just noticed the drone boards.

It’s kind of cool. You stick it above the brood box, with the tag hanging out, download an app, and then start taking readings (though you do have to be within thirty feet of the hive). Dead easy once I realized the plastic bit was part of the device and not the wrapping as I first believed. I’m repeating a picture so you can see the tab on the front of our hive.

Beekeepers can then upload their information to the “Bee Counted” website where they and others can compare readings. Broodminder also sells a scale, but The Engineer won $30 off a wi-fi hive scale, so he bought that one, which has the advantage of being able to be read anywhere from any device.

I think we both felt too inexperienced to judge if our bees have enough honey for the winter.

So far, we’ve weighed our coffee table — 169 pounds, if you must know. It would be great if our hive weighed that much.

We’ll find out once The Engineer decides how to mount it. I’ll keep you posted.

2 thoughts on “Propolis, Beeswax, and Owning a Wired Hive”