On Friday, we drove to Blue Sky Bee Supply to buy The Engineer a bee jacket and veil.

Then, on Sunday, we took down a dead tree, a preventive measure to prevent it falling on our hive during some future storm.

I also did battle with a wild rose that was taking over that area of our property.  The rose won — I have scratches to prove it — though I retaliated by hacking it to the ground.

The wild rose (also know as multi-flora rose, rambler rose, or Japanese rose) has a self-preservation instinct strong enough that the Ohio Weedguide calls it a “noxious weed.” The plant earns this distinction partly due to its prolific seed production (up to 500,000 per bush per year) and partly because one bush can cover a patch more than thirty-three feet in diameter.

Also, did I mention the thorns? Wickedly sharp and plentiful, they seize any piece of clothing or skin that happens to brush against a cane, and refuse to let go.

And yet, the scent of this plant is beguiling, sweeter than any hybrid on earth, so I can’t bring myself to kill it, even if I could manage that near-impossible feat. 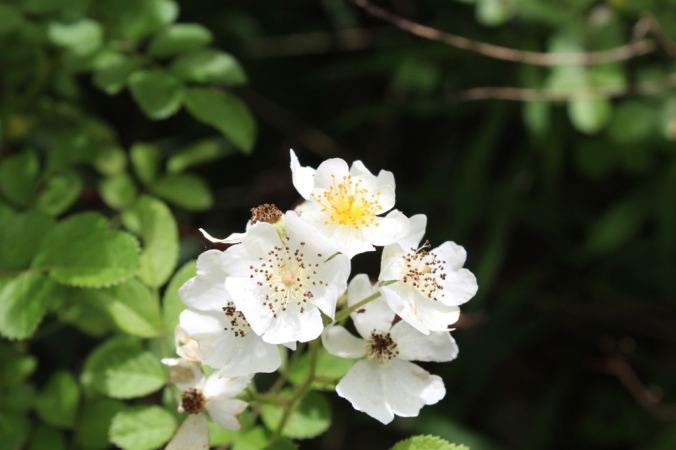 I predict our bees will be sipping its nectar within the year.

With tree and rose bush down (or at least in temporarily restrained), we were able to place the paving stones for our hive stand, mulch the area, and (finally!) place our stand outside.

All we need is the bees, which brings me to the point of this post. (You did know there’d be a point eventually, right?)

When people learn we are going to keep bees, they inevitably ask one question: “Where do you get them?”

I can’t answer without mention a fact I found astounding: Honey bees are not native to the U.S., although there are many native bees, which also pollinate. If you’re not squeamish about insects, check out this Popular Science article. It includes lots photos and a link to the U.S. Geological Survey’s great database for even more bee photos.

So, all honey bees came from somewhere else. Later, I’ll write a post about the different kinds, but for now, let’s talk about where you can get them.

Probably the most common way of populating a hive is to buy a package of bees. A package is basically a box of three pounds of bees (about 10,000 insects) and an unrelated, unmated queen. This can be shipped or picked up depending on where you purchase. For example, Draper Super Bee Apiary uses either UPS or Priority Mail. (This is not an endorsement. I just found them online and know nothing about them.)

In our area, many people purchase their package from Queen Right Colonies, a local bee supply store. Queen Right orders their packages from California, bringing in two semis full of bees each spring.

Since a package queen is unrelated to the bees she’s shipped with, a beekeeper must make sure she’s accepted before introducing her to her hive. Otherwise, the other bees will kill her. Since she’s unmated, there is a lag time involved for her to mate and produce eggs, as well as the amount of time it takes to raise the eggs into worker bees. (Drones generally come only after the hive has enough bees to get the work done.)

Here’s a queen from a package, safe in her little cage until she’s accepted. Photo from Donce.Lofthouse.com‘s photo essayy on hiving packaged bees.

This lag time can be useful for new beekeepers, allowing them time to get comfortable with their hive before they have new bees. But if the new queen doesn’t take, she’ll have to be replaced, starting the introduction process all over.

A second option is a nucleus hive or nuc. This is like a starter hive, usually including three or five frames with a mated queen and brood (eggs, larvae, and pupae). Having a proven queen and brood can provide a head start on developing a strong hive. On the downside, nucs cost a bit more, and you have to trust the person you’re buying from since nucleus hives tend to come from individuals or smaller beekeeping businesses. If you buy from the wrong person, you could end up buying someone else’s problems (pests, diseases).

A third way to acquire bees is to buy someone’s hive(s). Rarely available and ditto on the idea of buying someone else’s problems.

Lastly, some people get bees by swarming. This can be done using a swarm trap, hoping to attract swarming bees, or by placing your name on a swarm list for people to call when bees swarm on their property. While I’m not sure we’ll ever be ready to acquire bees this way, it looks interesting. That many bees can seem a bit scary, but I read somewhere swarming bees are at their most gentle because they have no hive to defend. Sometimes, they’ll just walk right into the box.  Click through to see it happen.

Did we make the right choice? Only time — and our bees — will tell.

Links
Queen Right Colonies’ summary of pros and cons of the four methods of getting bees.